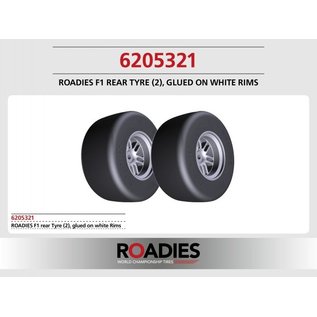 2017 ROADIES Tyres are improved and based on our successful experiences of the last couple of years, in which our tyres won the European Championships 2012/2013 and 2014. The complete four tyre set weights about 1320g and the reduced diameter eliminates rotating mass at the outer edge of the tyre which is more effective than saving weight closer to the rotating axle, plus the tyres` lower profile make steering more precise especially through fast chicanes.

After winning the 2012, 2013 and 2014 European Championship we can promise you a winning capable Tyre for 2017 without having to change it throughout the season.

The all new F1 compound is super soft and especially developed for cold temperatures like 0° to 20° Celsius while the F2 compound is to be compared to our 2014 Pro Tyre. This one works best from 10° to 25° Celsius.